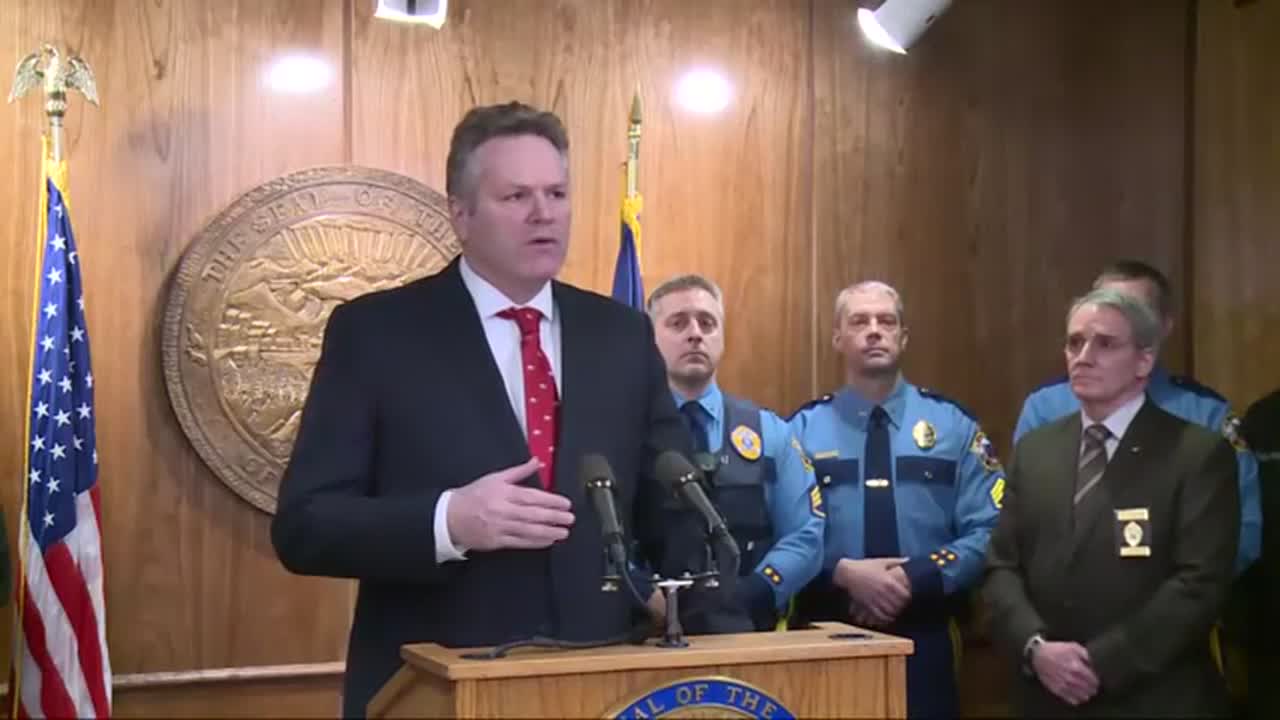 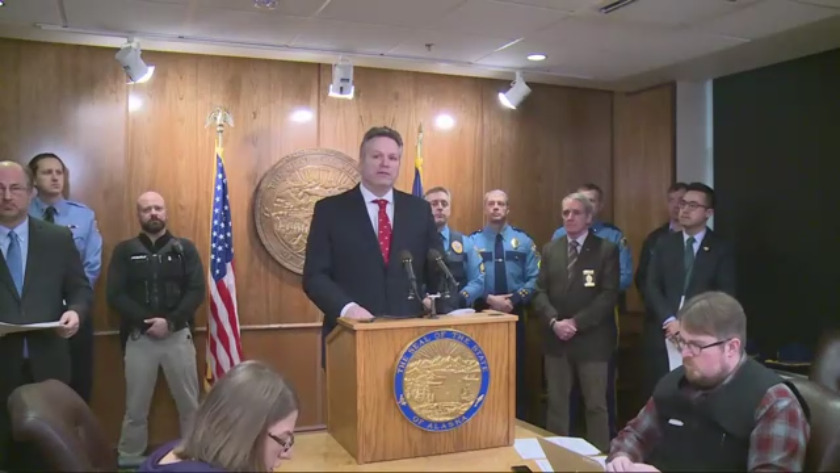 The governor spoke Wednesday morning on the legislation which is touted as an effort to repeal and replace the controversial Senate Bill 91, passed by the Alaska Legislature in 2016.

“We’re not going to spare any resources that will be necessary to turn this around,” the governor said.

Sen. Bill Wielechowski, D-Anchorage, welcomed the idea of additional funding but said when Dunleavy was a senator, he had a consistent record of voting against spending more money for law enforcement and prosecutors, opposing amendments that would have added funding for six new prosecutors, $200,000 in funding for VPSOs, and $200,000 in funding to combat domestic violence and sexual assault in the FY18 state operating budget.

Anchorage Democratic Rep. Matt Claman said it would take "a wise look at resources" to tackle crime and questioned where additional funding for public safety would come from.

At the Wednesday press conference, Attorney General Kevin Clarkson spoke about rising crime rates. “In the last five years, between 2013 and 2018, the overall crime rate is up 25 percent, violent crime is up 34 percent, property crime is up 22 percent.”

The governor’s bills are split into four areas of focus:

“I am just absolutely thrilled that the governor has proposed a repeal of Senate Bill 91, I think Alaskans across the state are breathing a sigh of relief,” said Senate Majority Leader Mia Costello, R-Anchorage, who has introduced her own bill to repeal SB91, adding that the bills were split in four to allow legislators to dig into each individual topic thoroughly.

Costello, who voted for the final version of SB91 and was one of the bill's original sponsors, said that as a single omnibus bill, SB91 had been unwieldy and the administration had wanted to avoid the same complications.

“There are a lot of common sense provisions in there that will have universal agreement” Wielechowski said, but he was more circumspect on the impact the bills would have for people on bail and how additional funding would be paid for.

Sex offenses
In Tuesday’s State of the State address, the governor said that Alaska’s sexual assault rate was five times higher than that of New York City, his first bill targets sex offenses in a variety of ways:

The bill would also close the loophole identified in the recent case of Justin Schneider by making unwanted contact with semen a sex offense. That proposal appears to already have broad support in the legislature with Sen. Peter Micciche, R-Soldotna, pre-filing a bill to close the loophole along with a similar bill in the House set to be introduced by Claman.

Classification and sentencing
The legislation would roll the back the clock on sentencing ranges for property crimes, including vehicle thefts, to pre-SB91 levels.

“For any felony sentence that was reduced under SB91, the classification bill returns the sentencing to where it was before,” said Assistant Attorney General John Skidmore after the Wednesday press conference.

Senate Bill 54, passed in 2018, returned some of the sentencing ranges for first-time offenses to former levels, the governor’s legislation makes the same change for second and third-time offenses.

Potentially more significant, said the Assistant Attorney General, would be the impact to misdemeanors, including in cases of theft in the fourth degree, which is theft under $200.

“There were actual cases of people who completed nine or ten misdemeanor offenses before we could get their case to trial,” Skidmore said.

Wielechowski said the Legislature will have to look at that and “what really works.” The Anchorage Democrat said it would be important to balance putting someone in jail to keep a community safe versus asking, “Does it rehabilitate a person to keep them in jail for a long time?”

The governor’s legislation would also strengthen Alaska’s drug laws by making it a felony to possess controlled substances. The stated goal would be to incentivize drug treatment.

“[The legislation] ensures that we have significant incarceration periods for those engaging in drug trafficking,” read a statement released by the governor’s office.

Claman, the current Chair of the Criminal Justice Commission, said making drug offense laws stricter could negatively impact addicts, particularly for first-time offenders. He said the Legislature would need to ask, “[whether we] want to give a person a chance to address addiction issues” or spend time behind bars?

Pretrial and Bail
The governor’s legislation proposes rolling back the controversial pretrial assessment tool and giving more judicial discretion. If the legislation passes, judges would be able to decide if someone charged with a crime should be:

“We need to untie their hands, we need to give them back their judgement,” Costello said, adding that judges should have more power as they had been hired for their “expertise and experience.”

The pretrial risk assessment tool was launched in 2018 as a way of putting a single number on a person’s likelihood of re-offending.

“When the judges had complete discretion, there was a 37 percent failure in terms of people who were back in front of the courts within three months,” Claman said.

Claman said the pretrial risk assessment tool brought an “actuarial” approach that had been effective in other states. He said it was showing promise in Alaska within a year of being implemented.

Probation and parole
The governor’s legislation takes a tough approach to parole and probation, “to address those probationers who abscond from Alaska or otherwise violate probation:”

- Eliminates caps on the amount of time that can be imposed when an offender violates probation.
- Returns discretion to judges to be able to adequately address the wide variety of original crimes committed as well as the variety of technical violations.
- Eliminate good time credit for offenders who are on electronic monitoring.

Claman and Wielechowski said they're still unpacking the bill, but Wielechowski questioned whether keeping people in jail longer, in all instances, was beneficial for the community.

The four bills will be read in the Senate before being assigned to committees.